World Heritage is the designation for places in the world that are of outstanding universal value to humanity, and as such have been inscribed on the World Heritage List to be protected for future generations to appreciate and enjoy. Places as diverse and unique as the Pyramids of Egypt, the Great Barrier Reef in Australia, Galápagos Islands in Ecuador, the Taj Mahal in India, the Grand Canyon in the USA, or the Acropolis in Greece are examples of the over 1000 natural and cultural places inscribed on the World Heritage List to date.

Further information can be found at UNESCO World Heritage Sites. 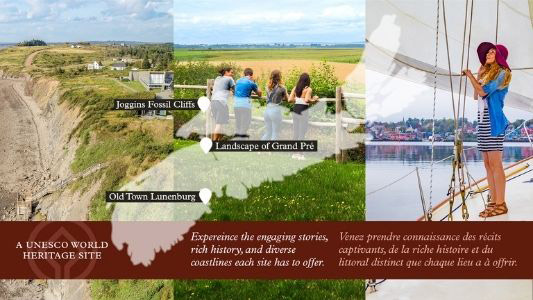 Biosphere Reserves are areas of terrestrial and coastal ecosystems promoting solutions to reconcile the conservation of biodiversity with its sustainable use. They are internationally recognized, nominated by national governments and remain under sovereign jurisdiction of the countries where they are located. Biosphere reserves serve in some ways as ‘living laboratories’ for testing out and demonstrating integrated management of land, water and biodiversity.

Old Town Lunenburg was inscribed by UNESCO as a World Heritage Site in 1995.

Lunenburg is the best surviving example of a planned British colonial settlement in North America. Established in 1753, it has retained its original layout and overall appearance, based on a rectangular grid pattern drawn up in the home country. The inhabitants have managed to safeguard the city's identity throughout the centuries by preserving the wooden architecture of the houses, some of which date from the 18th century. 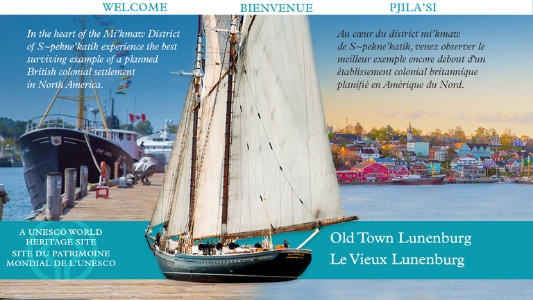 The Joggins Fossil Cliffs were inscribed as a UNESCO World Heritage Site in 2008.

Where the world-famous Bay of Fundy exposes a 300-million-year-old story.

Preserved in nature, uncovered by force. Explore one of nature’s most inspiring creations, where the highest tides in the world reveal the most complete fossil record of the “Coal Age,” 100 million years before the dinosaurs. Every rock holds the possibility of discovery, and our guided tours may lead you to find a missing piece of time’s puzzle. At Joggins, our backyard maybe 300 million years old but every day is different! The swamp forests produced massive quantities of organic matter that, over millions of years, created the coal deposits for which this period of history is named.

The Landscape of Grand Pré

The Landscape of Grand Pré was inscribed by UNESCO as a World Heritage Site in 2012.

Situated in the southern Minas Basin of Nova Scotia, the Grand Pré marshland and archaeological sites constitute a cultural landscape bearing testimony to the development of agricultural farmland using dykes and the aboiteau wooden sluice system, started by the Acadians in the 17th century and further developed and maintained by the Planters and present-day inhabitants. Over 1,300 hectares, the cultural landscape encompasses a large expanse of polder farmland and archaeological elements of the towns of Grand Pré and Hortonville, which were built by the Acadians and their successors. The landscape is an exceptional example of the adaptation of the first European settlers to the conditions of the North American Atlantic coast. The site – marked by one of the most extreme tidal ranges in the world, averaging 11.6 meters – is also inscribed as a memorial to the Acadian way of life and deportation, which started in 1755, known as the Grand Dérangement. 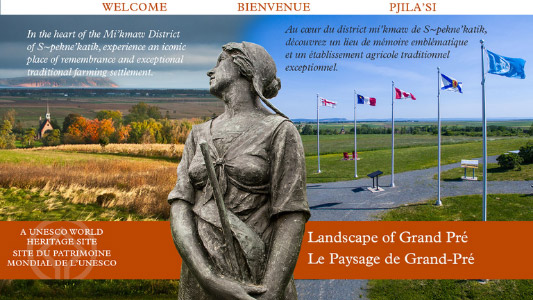 The Southwest Nova Biosphere Reserve is located in the southwestern portion of the peninsular Province of Nova Scotia, in eastern Canada. The region is bounded to the north shore by the Bay of Fundy, with the world’s highest tides, and to the east by the North Atlantic Ocean. The majority of the area’s terrestrial land base has been designated a biosphere reserve ‘zone of cooperation’ comprised of five counties — Annapolis, Digby, Queens, Shelburne and Yarmouth — with a population of approximately 100,000 people.

The Bras d‘Or Lake is an estuarine system located in the middle of Cape Breton Island. Cape Breton is a rugged and irregularly shaped island covering about 10,280 square kilometres. It lies north-east of mainland Nova Scotia and is joined to the mainland by a 1.4 km causeway constructed in 1955. The Differential erosion has resulted in steep hills around the lake and peninsulas within it, which divide the estuarine ecosystem into five, long, deep channels in the north half of the lake and a number of bays in the south. Along the west side of the watershed, steep hills rise abruptly to highland plateaus (the Cape Breton Highlands) at elevations of 250 to 300 meters.

Copyright © 2008 - 2021. Town of Lunenburg. All rights reserved.
A partner of the Municipal Website Venture.